Her story in her own words…

I shake as a large white envelope slips through the letterbox. My trembling fingers pull at the flap. I’m a grown woman with a family. I have done nothing wrong yet these letters make me feel like a criminal or a helpless child. The letters are from the Court of Protection.

Ever heard of it? Lucky you. I hadn’t heard of it either until the moment when my whole life fell apart. In September 2003 my husband Michael walked across a quiet country road towards me and was hit by a car. He fell to the ground and never stood up or spoke a word again. In the hospital, he collapsed into a coma. The three-year nightmare began.

As well as experiencing the horror of seeing the energetic man I had loved for more than 30 years rendered immobile and lifeless, I had to deal with the everyday aspects of having a large family of two children, four stepchildren and six step-grandchildren.

And I had to deal with the Court of Protection. 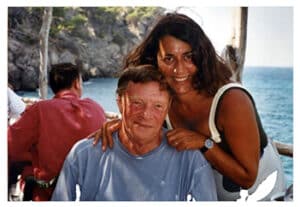 Michael and I were two independent working people. We had been married for 28 years. We had written our Wills, both our names were on the deeds of the house we shared in London and the Norfolk cottage we had renovated over the years.

We had separate bank accounts and most of the bills were paid from Michael’s account. Now, to continue living in the way we always had done, I needed to access the money in his account.

Michael had been moved to the Intensive Care Unit at Addenbrooke’s Hospital in Cambridge.

“You need to get the right forms,” the man at the Citizen’s Advice Bureau at the hospital told me.

“From a solicitor,” he replied.

“There are plenty of solicitors in Cambridge.”

I was in shock. I had witnessed the accident. I had seen the car knock Michael to the ground and I had held his hand and talked to him on the horrendous journey to the hospital. For as long as possible, I put off getting the forms.

The solicitor’s office I chose was Dickensian. The clerk, almost as ancient as the decor, handed me some forms and said

“Fill these in and get your husband to sign here.”

I burst into tears, the first I had shed since the accident. And, once I started crying, I couldn’t stop. The clerk looked at me uncomprehendingly.

“Then you need the Court of Protection,” he said.

I heard those words for the first time, words that represent an institution everyone should know about.

The Court of Protection brought me almost as much anger, grief and frustration into my life as the accident itself.

Over the years that followed Michael’s accident, I had to learn to accept a new reality, to settle into a different way of life. This I did gradually, lovingly, in my own way, feeling my energy and life-force change and keeping the family together.

But parallel to this I had to come to terms with the Court of Protection, an alien, intrusive, time-consuming and costly institution, which was completely out of tune with what we were going through. For almost three years it ruled my waking moments and my many sleepless nights.

We are advised to take out this insurance and that insurance but hardly anybody tells us to take out an Enduring [now lasting] Power of Attorney, which enables a person to appoint another to manage their financial affairs when they may be unable to act for themselves.

Yet, in a case like ours, this is the only way to avoid the Court of Protection, also known as the Public Guardianship Office.

What is the Court of Protection?

There are 55,000 clients registered with the Court of Protection, all so mentally incapacitated they are considered unable to act on their own behalf with regard to their finances.

Because they have not granted Power of Attorney to anyone else, their affairs are placed under the jurisdiction of the court. The court appoints a Receiver to act on the client’s behalf in the everyday running of his or her affairs, and the receiver is answerable
to the Court.

To become his Receiver, I had to fill in complicated forms, detailing every aspect of our lives. I also had to give notice to my children and stepchildren of my application.

Who is the court protecting and from whom?

As the weeks and months went by it became clear that the Court of Protection’s primary role was to protect my husband from me.

I was doing all I could to look after Michael and to keep our lives in some kind of order.

The Court was doing everything possible to place itself like a wedge between him and me, in order to protect itself from any accusations of wrongdoing should he ever “wake up”.

To perform this unwanted task, the unwieldy organisation stepped into my life and took away my adult independence.

The tone of the letters and the restrictions on how much and in what way our money could be spent undermined my freedom and self-respect. And if I did not do everything I was told to do, I could lose the right to be the Receiver.

An unknown person could step in and take over our accounts and the running of our lives.

What does the Court of Protection do?

Here are just a few examples of how the Court acted under the guise of “protecting” my husband:

On the day the letter arrived confirming I had been appointed as Michael’s Official Receiver another letter arrived demanding instant payment of £460; it threw me into a state of shock. Later, I was told this bill should have arrived a month later.

However, this was just the first of many fees to be paid to the Court.

To deal with the forms and additional accounts, I needed the help of an accountant, whose fees also had to be paid. Over the course of two and a half years, more than £3,000 was used upon the Court of Protection.

As Michael’s Receiver, I now had access to our accounts. But I was dismayed by the restrictions on my spending. I could write as many cheques as necessary up to £500. But if I needed to access more than that at any one time, I had to get permission from the Court – even to pay our daughter’s university fees and accommodation.

Similarly, when I needed building work done, I had to submit two estimates and justify my choice of builder; I then had to wait several weeks for the Court to give permission and release the funds.

The nerve-racking experience was exacerbated by the fact that each time I phoned the Court, I spoke to a different clerk. I had to explain my distressing situation anew and then wait at least two weeks for a reply.

I visited Michael daily. The court also sent a representative to visit him. I found it humiliating. I was dealing with doctors, nurses and carers on a daily basis yet I could not help feeling that I was the one being checked up on.

But the most distressing incident concerned a strip of land in front of our Norfolk cottage. Before the accident, the local council had approached us to build a public footpath on it. The work was carried out while Michael was in a coma. But when it came to finalising the deeds and paying the agreed compensation, my role as Receiver was apparently insufficient.

I was informed that the only way forward was to make someone else a trustee to the deeds of the cottage. The costs were almost equal to Michael’s share of the compensation.

We had gone there to discuss the council’s plans. Overwhelmed and intimidated by the Court, furious and exhausted, I eventually asked the council to keep the compensation money until Michael either died or recovered.

The Court of Protection, no doubt, has a part to play in the life of someone with no close family or friends, who is at the mercy of strangers.

But in our case, it was an interfering, terrifying body using legal forms and archaic language to protect itself at a huge cost to us.

After almost three years, Michael died. When I eventually received probate, I cried with grief.

A few months later, when I finally closed the Receiver’s account, and my independence and self-respect returned, I cried with joy. At last, I was free.

Yet all this could have been avoided – if only I’d known how.

By continuing to use the site, you agree to the use of cookies. more information

As is common practice with almost all professional websites this site uses cookies, which are tiny files that are downloaded to your computer, to improve your experience. This page describes what information they gather, how we use it and why we sometimes need to store these cookies. We will also share how you can prevent these cookies from being stored however this may downgrade or 'break' certain elements of the sites functionality.

We use cookies for a variety of reasons detailed below. Unfortunately in most cases there are no industry standard options for disabling cookies without completely disabling the functionality and features they add to this site. It is recommended that you leave on all cookies if you are not sure whether you need them or not in case they are used to provide a service that you use.

You can prevent the setting of cookies by adjusting the settings on your browser (see your browser Help for how to do this). Be aware that disabling cookies will affect the functionality of this and many other websites that you visit. Disabling cookies will usually result in also disabling certain functionality and features of the this site. Therefore it is recommended that you do not disable cookies.

In some special cases we also use cookies provided by trusted third parties. The following section details which third party cookies you might encounter through this site.

Hopefully that has clarified things for you and as was previously mentioned if there is something that you aren't sure whether you need or not it's usually safer to leave cookies enabled in case it does interact with one of the features you use on our site. This Cookies Policy was created with the help of the CookiePolicyGenerator.com

However if you are still looking for more information then you can contact us through one of our preferred contact methods: